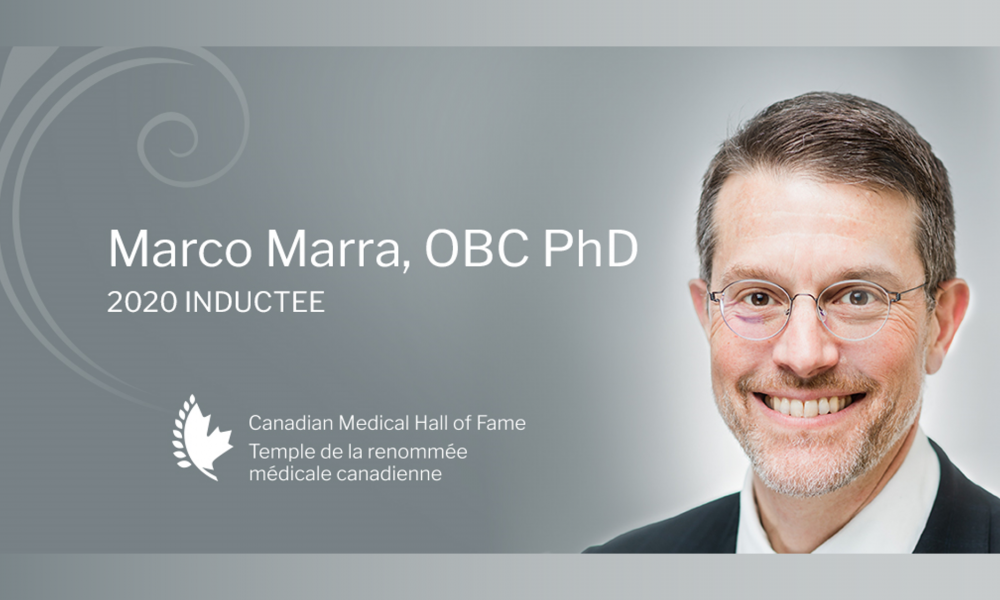 Today, six outstanding individuals were inducted into the Canadian Medical Hall of Fame. Among them, Dr. Marco Marra, Director of Canada’s Michael Smith Genome Sciences Centre at BC Cancer.

Originally scheduled for April 2020 and then optimistically postponed until April 29, 2021 in the wake of the ongoing Covid-19 pandemic, the 2020 Canadian Medical Hall of Fame (CMHF) Induction Ceremony was made virtual. The pre-recorded production is now available to the public online where it will remain for one year.

A recipient of numerous awards, Dr. Marra is one of the world’s most cited scientists in the field of molecular biology & genetics with more than 500 scientific publications. He is a hand-picked successor of Dr. Michael Smith, Nobel and CMHF Laureate, who along with Dr. Victor Ling, former Vice President of Research at BC Cancer, was an early champion of genome research in Canada, and who together established the GSC at BC Cancer. Dr. Marra himself has since mentored many scientists and graduate students who are now providing the expertise and insight needed to fulfill the promise of genomics through technological innovation, enhanced informatics and creative clinical applications.

Dr. Marra continues to extend the reach of genomics toward managing and eradicating disease. His research has uncovered new cancer mutations, candidate biomarkers and therapeutic targets, and has been instrumental in demonstrating the functional interplay between the cancer genome and epigenome. He played a pivotal role in the first proof-of-concept for the effective use of whole genome analyses in personalized cancer medicine, leading to the development of BC Cancer’s Personalized OncoGenomics (POG) program. POG now represents one of the first applications of whole genome sequencing in a clinical setting, using information derived from thousands of individual cancer genomes and transcriptomes to identify promising therapeutic targets in individual patients. An episode of Dr. David Suzuki’s The Nature of Things, titled Cracking Cancer, was devoted to the promise of POG and the hope it represents for treating advanced cancers. POG has also informed development of Canada’s largest ever clinical data-sharing initiative, the Marathon of Hope Cancer Centres Network.

In 2003, at the height of the SARS outbreak around the world, Dr. Marra and his team of researchers captured international attention by rapidly and successfully sequencing the genome of the SARS coronavirus, definitively identifying the agent that caused SARS and providing a basis for both vaccine development and diagnostic testing. The SARS experience showed the power that genome sciences can bring to revealing critically important molecular disease features, and its value in the midst of a public health crisis.

One of the largest collaborative scientific projects in history was the international Human Genome Project begun in 1990 and completed in 2003. The massive and unprecedented scale of genomic data provided by the Project has since revolutionized our understanding of disease biology ranging from cancer to cognitive impairment and continues to unfold new possibilities for integrating laboratory research and clinical practice to improve cancer control. The paper published in the 15 February 2001 issue of Nature, titled "A physical map of the human genome" describes the construction and use of the human genome map to fuel human genome sequencing. Dr. Marra made fundamental contributions to that effort by devising and then implementing the approaches that led to the construction and use of the map, which served as the centralized coordinating resource for the sequencing effort.

Today, Dr. Marra is being recognized among a highly select number of Canadian citizens whose outstanding leadership and contributions to medicine and the health sciences have led to extraordinary improvements in human health. As noted by the Canadian Medical Hall of Fame, these pioneers in their field are role models who inspire young Canadians to pursue careers in the health sciences. Six Canadian medical heroes are inducted annually to the Canadian Medical Hall of Fame.

Learn more about the 2020 inductees.