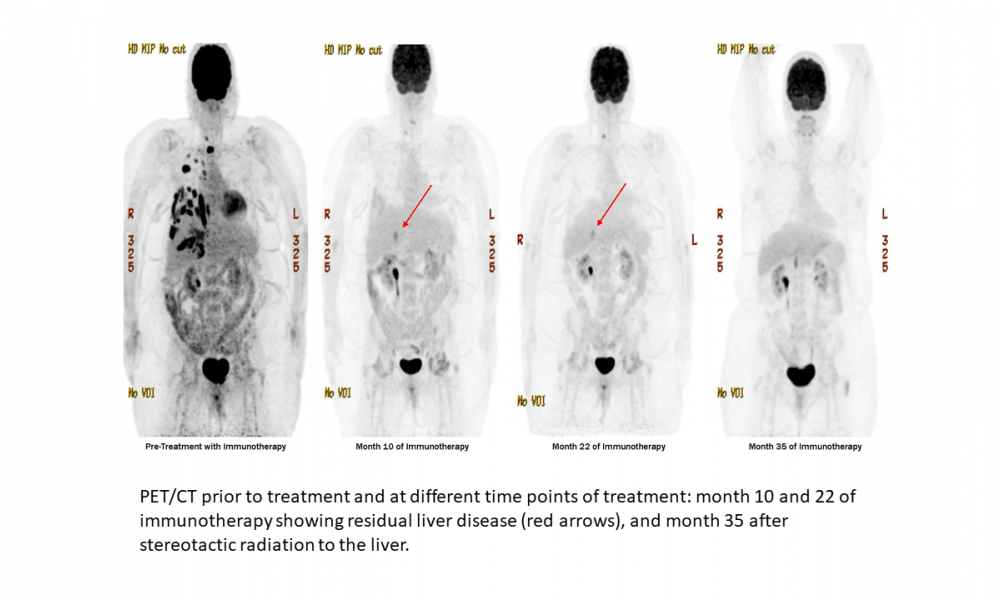 BC Cancer’s Personalized OncoGenomics (POG) program is a patient-centric research initiative that aims to better understand cancer formation, evolution and response to treatment using genomic data. POG analysis can confirm the primary site of a metastatic cancer, support standard treatments for advanced disease or, in some cases, identify novel therapy options. A new case report from the POG team provides genomic insight into why a patient with metastatic melanoma of the eye had an exceptional response to immune checkpoint inhibitor therapy.

Melanoma is a type of cancer that develops in the cells that give skin its color. The eye also contains this type of cells—that’s why we have different colored eyes—so melanoma can develop there too.

The most common type of eye melanoma is uveal melanoma. Since the uvea is the middle layer of the eye, uveal melanoma can be hard to detect. The five-year survival rate for uveal melanoma that spreads to other parts of the body is 15%.

Immune checkpoint inhibitor (ICI) therapy, which helps the immune system destroy cancer cells, is not often successful in treating uveal melanoma despite its success at treating other types of melanoma. When a person with uveal melanoma does receive benefit from ICIs, the effect does not usually last.

Specifically, the gene expression signatures suggest a potential role for plasma cell-mediated response in preventing further growth of the metastatic liver lesion. This is in contrast to other uveal melanoma cases and consistent with what is seen in less aggressive cancers.

In addition to somatic changes within the tumour tissue, several germline variants were identified through DNA sequencing of patient blood cells. This included single nucleotide polymorphisms (SNPs) that previously have been associated with autoimmune disease.

Autoimmune diseases occur as a result of the body’s own immune system attacking healthy cells. One example is vitiligo, which the patient in this case report experienced as a side effect of treatment.

Germline findings from this study warrant further research into a possible connection between certain SNPs and a positive response to ICI therapy. Clinical evaluation of other patients with uveal melanoma could determine whether vitiligo or other autoimmune side effects are indicators of positive therapy outcomes.

Additional investigation into the role of plasma cells in prognosis and response to ICI and other immunotherapy is also suggested based on this case report. Understanding the molecular mechanisms behind the immune response within the tumour microenvironment  could lead to improved treatment options for rare and aggressive tumors like uveal melanoma that rarely benefit from immune checkpoint inhibitor therapy.

“Our results highlight the important role of genomic and transcriptomic data in understanding why tumours respond to certain treatments,” says Dr. Irene Yu, the report’s first author. “This is key in the era of personalized medicine, which may be possible even for rare and aggressive cancers.”

This work would not be possible without the participation of our patients and families, BC Cancer’s Personalized OncoGenomics (POG) team and the generous support of the BC Cancer Foundation and Genome British Columbia (project B20POG). We also acknowledge contributions towards equipment and infrastructure from Genome Canada and Genome BC (projects 202SEQ, 212SEQ, 12002), Canada Foundation for Innovation (projects 20070, 30981, 30198, 33408) and the BC Knowledge Development Fund. The results published here are in part based upon data generated by the following projects and obtained from dbGaP: The Cancer Genome Atlas managed by the NCI and NHGRI.