From the first multicellular genome sequence to transcriptomes of single cells: Truly a giant in the field of genomics, Dr. Waterston is one 16 speakers that will present at the GSC’s 20th Anniversary Symposium, November 21, 2019. 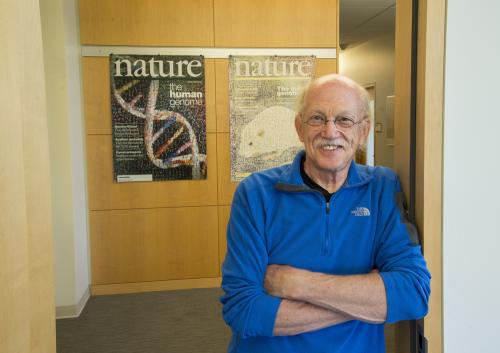 When Dr. Robert (Bob) Waterston began his genome science research in the mid 1980’s mapping and sequencing the genome of the nematode worm C. elegans, his colleagues told him he was throwing his career away. But forty years later, Dr. Waterston is still contributing groundbreaking research to the field of genomics.

“Today, genomics pervades everything,” says Dr. Waterston, “Whether it is ecology, health or basic research, genomics is everywhere.”

Dr. Waterston developed a keen interest in biology while attending medical school at the University of Chicago, and decided to pursue a PhD alongside his MD. In 1969, he attended a public lecture presented by Nobel Laureate Dr. Sydney Brenner. Fascinated by his work aimed at understanding life at the molecular level using C. elegans, Dr. Waterston joined Dr. Brenner’s group as a post-doctoral fellow in 1972. There, he discovered mutations that affected the worm’s ability to move, and eventually identified and cloned genes important for muscle function.

He continued his work on understanding the molecular biology of muscle movement in C. elegans when he established his own laboratory at the University of Washington in St. Louis. In the mid-1980s, Dr. Waterston returned to Dr. Brenner’s group for a sabbatical as a Guggenheim fellow and began his pioneering work with Dr. John Sulston and Dr. Alan Coulston to map the entire genome of C. elegans. In 1998, they published the first ever full genome sequence of a multicellular organism.

He subsequently played a central role in the Human Genome Project and in the sequencing of the mouse, chimpanzee and other genomes. In 1994, Dr. Marco Marra joined his laboratory as a post-doctoral fellow where, under the guidance of Dr. Waterston, he constructed the physical map of the human genome that provided the framework for the assembly of the human draft sequence. While their areas of research have since diverged, Dr. Waterston has enjoyed watching the success of Dr. Marra at the GSC.

“Marco and Steve (Jones) have positioned the GSC at the cutting edge of human genomics,” says Dr. Waterston, “They have been driving the clinical application of genomics. That is a major challenge and they are making strong contributions.”

In 2003, Dr. Waterston took up his current position as Professor of the Department of Genome Sciences where also served as chair and  the William Gates III Professor of Biomedical Sciences at the University of Washington in Seattle until last year. His work continues to advance our knowledge of genetics using C. elegans. His group has developed novel technologies that allow for expression pattern analyses at single cell resolution, and have used these methodologies to profile the transcriptomes of embryonic cells.

“We have now profiled the transcriptomes of almost every cell in the worm as it progresses from the 28-cell stage to terminal differentiation,” says Dr. Waterston.

He will present these and related advances at the GSC’s 20th anniversary symposium.

Dr. Waterston is a member of the National Academy of Sciences and has been the recipient of a number of prestigious awards including the Gairdner Award, the Dan David Prize, the George W. Beadle Medal of the Genetics Society of America, the Alfred P. Sloan Award from the GM Cancer Research Foundation and the Gruber Prize in Genetics.